Can We Criticize A Pope? 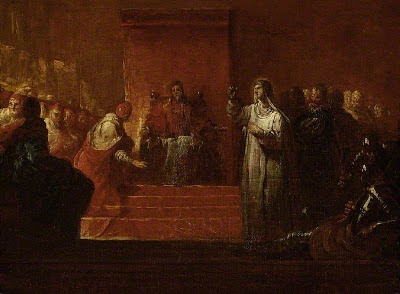 There is a debate going on between Fr Dwight Longenecker and Sean Fitzpatrick over at Crisis Magazine over whether a pope can be legitimately criticized. Fr Longenecker says yes; Mr Fitzpatrick says no. Here is the link to the debate, it is worth reading.

Some believe that one can criticize a pope, in charity and with respect of course. The first to do it was St Paul who publicly rebuked St Peter (Galatians 2:11-14). Among others was St Catherine of Siena who didn't spare her words and did not hesitate to publicly rebuke the pope whenever she saw it needed to be done. And in the last pontificate the Cardinal Archbishop of Buenos Aires publicly criticized Pope Benedict following the Regensburg speech in 2006.

An interesting debate. But let us never forget we are Christians, committed to truth and to charity.
Posted by Father Director at 6:31 PM

Email ThisBlogThis!Share to TwitterShare to FacebookShare to Pinterest
Labels: Pope, Synod on the Family