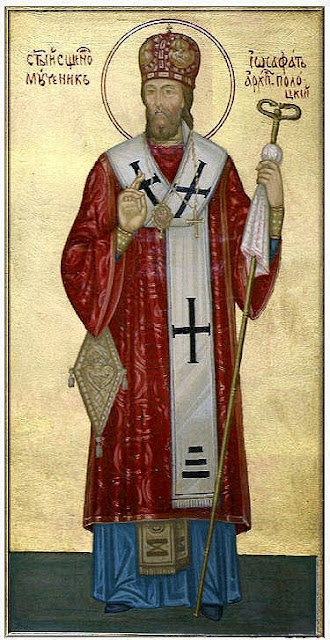 I  had an interesting encounter over the summer which made me realise that some of my hopes of Christian unity might just be a little too optimistic at the moment.  I had visited, in private, the shrine of an Orthodox saint and while the laity welcomed me with gentle hospitality, the same could not be said of their priest.  I won't go into details, but the thrust of the encounter was such that because I was not a minister of the Orthodox Church my validity as an ordained priest was not accepted.  That is why, this year, today's feast is poignant for me and leads me to particular prayer for unity with our Orthodox brothers and sisters.
St Josaphat laid down his life for Christian unity.  I know he is a controversial figure among many of our separated brothers and sisters, but for us he is one who recognised that union with Peter was vital for Christians, and so worked to bring Eastern Christians back into communion with the See of Peter.  His hard work both in the East and with Rome to promote the Eastern rites brought many blessings both to Eastern rite Catholics and to the Church as a whole.  St Josaphat teaches us that there can be a legitimate diversity within the Church.  His work also reveals that there is little that now divides us from the Orthodox: yes, the position of the Pope is a problem for the Orthodox, but the real barrier to unity, I think, is ultimately human difficulties, and all the theological discussions in the world might not overcome them.  At the end of the day it is God's grace that finds success in reconciliation.
So today, my friends, let us pray for reconciliation, that the hearts of Catholics and Orthodox may be opened to God's grace and healing so we may all be one.  The authenticity of martyrdom is revealed in the martyr's willingness to forgive those who kill him: Josaphat forgave his enemies, and laid down his life for them and for reconciliation.  May his sacrifice yield fruit in our lives, our efforts and our sacrifices.  And today, though many may have problems with St Josaphat, I wish all our Orthodox brothers and sisters every blessing and grace. 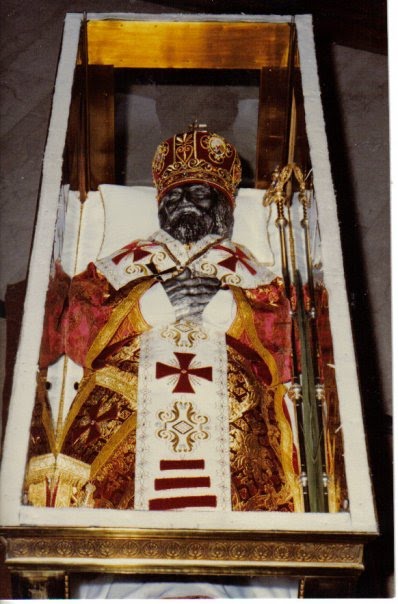