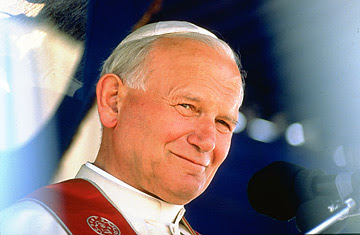 Well, the Holy Father has signed the decree for canonisation: Blessed John Paul II, beloved Pope and co-patron of our Fraternity is to be canonised!  The quickest Cause in modern times.  What a day!  The Holy Father has yet to announce the date - he wants to consult with the Cardinals first (why, I wonder?).  So we'll keep our eyes and ears open.
Blessed John XXIII is also to be canonised in the same ceremony - the Pope has dispensed with the requirement for a second miracle, as is his right.  Some may not be happy with that particular with such a controversial figure as John XXIII.  Yet we need to bear in mind that the same Papal privilege was invoked in the cases of St John Fisher, St Thomas More and St Maximilian Kolbe, so it is not unusual.  We already had a miracle for Blessed John's beatification, so we can take it that it is God's will that he be glorified.  That said, with the joint canonisation we have an opportunity to look at who Blessed John really was, not a screaming liberal, but an orthodox pontiff who sought real reform in the Church to prepare for the great mission which lies ahead.  In this Blessed John and Blessed John Paul are of the one heart and one mind.
We await the details of Blessed John Paul's miracle, but we know it concerns a Costa Rican woman, Floribeth Mora, who was suffering from a cerebral aneurism who was suddenly and inexplicably healed after prayer to the Blessed Pontiff in the hours after his beatification on the 1st May 2011.  Reports from the Vatican say that the details of the miracle will astound.
So now, friends, get packing!  We're going to Rome.  I can hear the engines revving in Poland already.   Jesteśmy na naszej drodze!
Posted by Father Director at 2:00 PM