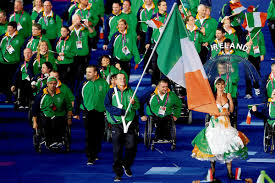 The Paralympics are well underway in London - I'm not getting much of a chance to follow the events, but by all accounts the performances of the athletes are wonderful.  I caught a quick glimpse of the opening ceremony - bright and colourful, although the emphasis on science and technology was a bit one sided.  Anyway, the Paralympic movement is a marvellous one, as is the Special Olympics movement, because they bring us face to face with the fact that disability is not always a barrier to men and women pursuing active lives.  Indeed these two movements are very much pro-life movements.

In relation to this Madeleine Teahan has an interesting argument in an article on the Catholic Herald website.  She asks : "How can you cheer for our Paralympians and support Britain's abortion laws?"  In response, you can't without being a hypocrite.  Many of those who will clothe themselves in glory in these couple of weeks would have been prime candidates for "termination" in the UK, and here in Ireland people with similar disabilities are used as the hard cases by the pro-abortion lobby to lobby for the legalisation of the procedure here.   It is enough to turn your stomach as you listen to pro-abortion advocates, politicians among them, waxing lyrical about these athletes's heroism and shining example.  But then I suppose we have to realise that they are so blinded by their inhuman ideology they actually cannot see their hypocrisy.

But let us celebrate the achievements of these wonderful athletes - they are a credit to the human race and remind us of the ineffable dignity of the human person who can overcome even the greatest obstacles.  Every life is precious and good, and every person conceived has a vocation and a part to play in the building up of humanity. As we see in the labours of each of these individuals, if one life is destroyed, humanity and the world are impoverished.

John Waters has an excellent article on abortion in his column in The Irish Times today - he reflects on how the pro-abortion brigade have tried to scupper debate and demonise the pro-life lobby.

Another interesting article to bring to your attention: an animal rights group are accusing a priest of "murdering" a stray cat - indeed they went as far as coming into the middle of Mass to protest.  The protesters say that he refused to allow the rescue of a cat which was supposedly trapped on his roof.  Apparently there was no sign of a cat on the roof, and as anyone who has ever had a cat knows if they end up on a roof, most tend to be able to get down again.  The protesters remained outside the priest's house protesting until the early hours of the morning.  Crazy people.

And here is an insightful argument on how contraception has become so prevalent in our society, one doctor seemed to be pushing it on a patient as if she were recommending vitamin tablets.
Posted by Father Director at 8:00 AM