Yesterday was the feast of St Monica, the patron saint of mothers and alcoholics (not that the two related in any sense).  Today we celebrate the feast of the son she converted through her prayers, Augustine who became a priest, a bishop and one of the Church's greatest theologians and Doctors.  So these days are most definitely Augustinian - so happy feast day to our Augustinian brothers and sisters.

One of the events from the lives of these two great saints which has intrigued me is the experience they had at Ostia, the port of Rome.  Converted, Augustine was heading back to North Africa accompanied by his mother, son and brother.  Monica was ill, yet the weeks were grace filled for her as she and Augustine had conversed and prayed together, her son discovering the depth of sanctity in her.  On one day as they looked out into a garden something happened - it is not clear exactly what, but it seems to have been a vision.  Both experienced it together, a sign that their hearts were finally one in love with each other, and in love with God.

St Monica, I think, would make a wonderful patron for the mothers of priests, since she was the one who, I think, proved to be the greatest influence on her son and through her prayers and sufferings won him for the service of the Lord.  Augustine is, in a sense, Monica's gift to the Church.  And what a gift he proved to be.
Augustine took on the pagan world and could argue with its greatest apologists.  He spoke about purity and chastity, and he taught them about God's grace.  He was not afraid of his critics, nor did he feel he should remain silent when the secular authorities thought what he had to say inconvenient.  There is a lesson here for all our pastors, particularly our bishops: they have a responsibility to preach the Gospel, protect the flock and hold the civil authorities to account.  Anyone who doubts that need only read Augustine's sermon on the shepherds - not easy reading for any priest!

Today is also the anniversary of the martyrdom of the English martyr, St Edmund Arrowsmith.  As you may know I have great devotion to St Edmund - he was a larger than life character who quietly and heroically served the Catholics in the north of England until his execution in 1628.   See his biography here. 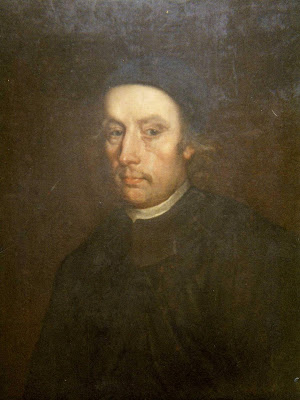 St Edmund's hand is  preserved in the Church of SS Oswald and Edmund Arrowsmith in Ashton-in-Makerfield near Haydock in Lancashire.  Now called the Holy Hand, it has been instrumental in the working of many miracles over the years.  Edmund was canonised in 1970 among the Forty Martyrs of England Wales.  His local feast day is the 30th August, and his feast with the Forty Martyrs is the 25th October.  St Edmund is a Saint worth coming to know, particularly in these days when we face persecution for our faith.  As I have found myself, he is a good friend.  And one grace he can obtain for you is that of increased zeal - he has a way of tutoring you in the John the Baptist school of pastoral theology!
Posted by Father Director at 8:00 AM