A Modest Proposal On The Feast Of A Pro-Life Saint 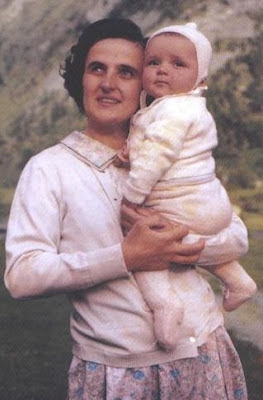 The Pro-life movement doesn't have a declared Patron, though Our Lady of Guadalupe tends to be regarded as the Patroness of Life.   Today's Saint would also make a fitting patron - St Gianna Beretta Molla, the mother who died in 1962 offering her life for her child.

I sure you all know her story: born into a devout Catholic home in 1922, studied to become a doctor after discerning she did not have a vocation to the religious life.  She married Pietro Molla and they had three children in quick succession. She balanced life as a wife, mother and doctor, with work in service of the Church, particularly Catholic Action and the Society of St Vincent de Paul.  She was renowned for her holiness and charity.

In late 1961 she became pregnant again, but a growth was also diagnosed in her womb.  Offered an abortion as the way to safe her life, she refused: apart from knowing there were other options available, she would not take the life of her unborn child - abortion is murder: if she had to sacrifice a life she would sacrifice her own rather than kill the baby.  A baby girl was born on Holy Saturday 1962, Gianna died a week later from complications.  She was canonised in 2004 by Blessed John Paul II in the presence of her husband and children - I think that may be a first.

Given the uphill battle we have now to keep abortion out of Ireland, we need St Gianna's intercession.  So now I am making a suggestion, from the day you read this post until the day Ireland is free of the threat of abortion, offer three Hail Marys seeking the intercession of St Gianna.  It is a simple offering, it will no more than a moment, but that daily offering may well help the unborn of Ireland.   Pass on the word.

Saint Gianna,
Wife, Mother, Doctor and exemplary Christian,
intercede with Christ, our Lord of Life
to help us in these times to proclaim the Gospel of Life;
to bring to an end the evil of abortion
and the conversion of those who promote it;
to help and console those women tempted to do it,
and to heal those who have had one.
Watch over Ireland in these critical days.
Amen.
Posted by Father Director at 12:00 PM