In Bed With Mao 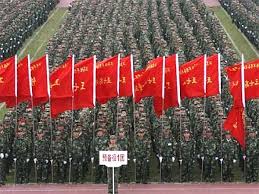 It never ceases to amuse me (and at times anger me - God forgive me!) to see the double standards at work in politics and indeed in public life.
The Irish government is getting ready to sign a trade deal with China and, like many other governments, fall down in veneration of the Chinese economy.  And yet China stands as one of the greatest offenders in the area of human rights, abusing its own people.  It has a forced abortion policy and has invaded some of its neighbours, mostly notably Tibet, and like the colonial empires of old, for all intents and purposes, it owns most of Africa.
And yet for the sake of mammon, most western governments, the Irish among them, are prepared to ignore all this and enter into various deals which, in the long run, give China more power.  After all, China is now the world's money lender and uses its power in this area to keep its dastardly regime up and running, and indeed, give it respectability.
And then we have the government downgrading relations with the Holy See and posturing when the Vatican maintains its sovereignty.  Ironically, as Ireland gets into bed with China, the Vatican is one of those countries which are trying to coax China towards a greater respect for human rights.
Of course, it cannot be forgotten that Ireland is now a favourite with the Chinese.  The "beloved leaders" of the People's Republic heaped praise on Enda Kenny when he attacked the Pope and the Holy See last July - his diatribe confirmed for the Chinese authorities that persecution of Catholics was the right thing to do.   I must sign on for a tour of government buildings soon - just to see if there are photos of Mao anywhere to be found.
Posted by Father Director at 8:00 AM