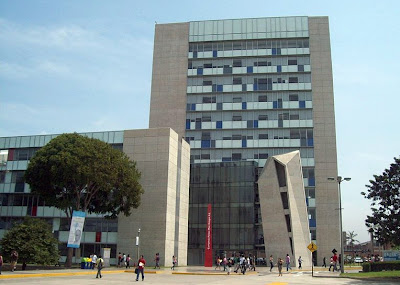 Pontifical University of Peru
Well, I've been a good priest this morning and, so far, have marked a fair number of parishioners with the ashen cross.  I am just back from the schools, as I as left them, the pupils were all comparing the size of their ashen crosses.   I have two schools in my parish - St Louis's in Rathkenny and St Patrick's in Stackallen.  Both are excellently run, two fine principals and dedicated staff.  I am a blessed priest!
Of course you will know that we in Ireland are getting ready for a battle to keep our Catholic schools.  Thankfully both my principals and their staff are committed to providing Catholic education which the people of the parish want for their children.  And we will do everything we can to keep that service.
Catholic education goes beyond primary schools, even into Universities, and I see the Rector of the Pontifical University of Peru has been given an ultimatum by Cardinal Bertone: comply with the Church requirements for Catholic colleges, as laid down by Ex Corde Ecclesiae, by Easter Sunday or else....   By the way, this problem with the University has been going on since the 1970's - so we can't say the Vatican is acting rashly. Here's the background.
I'm sure staff in the University must be in shock - the Holy See rarely issues such ultimatums.  No doubt we will hear the mantra of "academic freedom".  This ultimatum does not interfere with academic freedom, it just reminds the University that it has to be true to the honours and privileges it has received, or else lose them.
A Pontifical University has to follow certain guidelines, and it must not become an institute which acts in a manner which is contrary to Church teaching.  By all means embrace the secular agenda, but if a University does so, it must not expect the patronage of the Church or her benefactors.  One of the problems we have with organisations which were once Catholic but have since disavowed their relationship with the Church, is that they want to hang on to benefices and privileges which were conferred because they were Catholic and because they were dedicated to promoting the faith.  I know of one charitable organisation that was trying to break its link with the Church, but still wanted to be the charity which the Church promoted during the Lenten period.  That's not on.
The Pontifical University of Peru finds itself in a very difficult position - it has no choice but to accept the Holy See's decision otherwise it looks like it will lose its Pontifical status and that means they lose their campus - the donor when giving the land for the University did so on condition that it remains a Pontifical University - if it no longer has that privilege, then the land goes to the Archdiocese of Lima.  That will mean the end of the University, or at best, a desperate attempt to rent from the Archdiocese or find alternative accommodation - I'd imagine the latter would be the most likely outcome.
I notice that in response to this news story, some are saying that the Vatican should look at other Catholic colleges.  I have to agree with that.  A review of Catholic education in these third level institutes might be a good idea.  Too many people, organisations and institutes are trading under the title Catholic and yet they represent not the teaching of the faith, but the exact opposite.   In such cases, the greatest irony is that the very Church they are attacking and rebelling against is the one which is providing them with their livelihood.
We have so much to pray for as we weep for our own sins!   Thank God for Lent - it is a time for us to get our lives straight again and do some good, honest fasting.  I wish you all a Blessed Lent!
Posted by Father Director at 12:59 PM