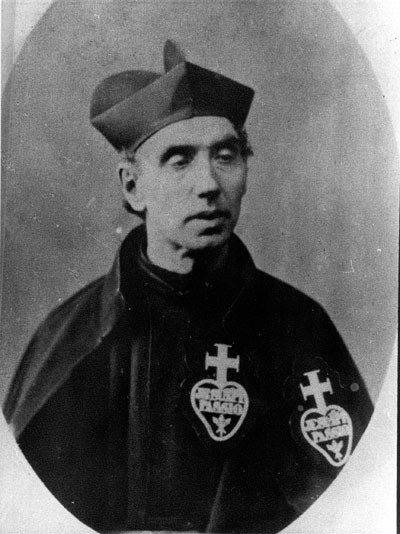 Happy feast day to you all: today is the feast of our newest Irish Saint - St Charles of Mount Argus, a Dutch Passionist who lived most of his priestly life in Ireland.  He is Ireland's Padre Pio - a man with various mystical gifts, among them healing and discernment, and a priest who went into ecstasy as he celebrated Mass.  He was canonised in 2007, and it is a shame that he is not more widely known, particularly in Ireland.   At the time of his canonisation, I saw his glorification as a gift to the priests of Ireland: a patron, model and intercessor at a time when the morale of priests is very low and when some may be tempted to leave.  He is also a marvellous example of devotion to the Holy Mass, to the Sacrament of Confession and his love and obedience to the Pope.  As some priests may be tempted to rebel, St Charles, in his humility and holiness, calls us all back to see the right path for priests to take in their ministry.

Thanks to all of you who sent best wishes for my father and included him in your prayers.  He is back home now recuperating.   The blockage which caused the problem has been cleared and a stent put it.  It is amazing that something as small as a stent can mean the difference between life and death.  Science and medicine have come a long way, thank God.  Dad's GP is keeping a close eye on him, as are my mother and the rest of the family.  Poor man, it will be like living under surveillance by MI6 for him.  But thanks be to God for his mercy, and thanks to you for your prayers: I will remember you at Mass for your kindness.

A lot of things have been happening since I last blogged, one of the most notable developments has been the granting of a church to the Ordinariate in the UK - what a wonderful gift.  They have been given the Church of Our Lady of the Assumption and St Gregory, Warwick Street, Soho, the former Portuguese embassy church, during the persecution that church was a lifeline for many London Catholics.  It is also very central, so that will be handy for the Ordinariate and for those who want to participate in the ceremonies and devotional life of the community.  The dedication of the Church is appropriate - Our Lady of course, but also St Gregory the Great - the Pope who sent St Augustine of Canterbury to England to begin the conversion of the south of England.

The Ordinariate is doing well: a community of Anglican nuns have been received into the Church over the last few days - their community was an important one in the religious life of the Anglican Communion.  We wish them every blessing as they continue their religious in full communion with the Church.  They have just been established as a new congregation in the Church: the Sisters of the Blessed Virgin Mary.  I also see that the Ordinariate has been given the care of a parish in the diocese of Southwark - Precious Blood near London Bridge.  Things are moving at last.  It will be interesting to see how things develop as recent decisions in the Church of England alienate more and more members: the most recent is the decision to lift the ban on appointing practicing homosexuals as bishops.  Interestingly it is a decision that is being criticised by both conservatives and liberals.

An interesting article from LifeSiteNews to keep us informed as the campaign for life continues here in Ireland.  Time Magazine laments the inability of the pro-abortion lobby to keep up the momentum in pushing their cause - too many inroads are being made by the pro-life movement.  Thank God for that, but as someone said to me: millions of children are dying every year in abortion clinics and pro-abortion groups have the ears of government and access to public funds to finance their campaign.  We have a lot of work to do.  Here is an interesting article on how, despite medical evidence to the contrary, abortion groups still insist abortion is needed to save women's lives.

And finally, Cardinal Piacenza, the Prefect of the Congregation for the Clergy, has written a letter to the mothers of priests and seminarians.  It is a beautiful piece of writing, so if you know a mother of a priest or seminarian, print it off and give it to them.
Posted by Father Director at 8:00 AM