Chesterton, Babette And The Chocolate Eclair I have been thinking about one of the subjects of my last post, G.K Chesterton's weight and his alleged lack of temperance. I've done a little reading around it and discover that we have here the tip of an iceberg which has been floating between two camps for years: those who like Chesterton and those who are uneasy with him, with others clinging in between on common ground between the two, and the issue of his weight/temperance/gluttony has been a subject of one of their heated debates. I'm not going to wade into the row, but I just hope that the priest conducting the initial investigation will find enough evidence to allow a Cause be opened.

However I have been thinking about Chesterton's love of food and drink and if we can jump what appears to be a hurdle, he will make an important contribution to the Church and our understanding of the Saints in the sense of their appreciating God's gifts.

It is an established tradition that we venerate the ascetic in the Saints, and quite rightly. Hagiographies praise Saints for fasting and penance, and correctly so. We are astonished by the Saint who fasts for forty days, taking nothing but water, or who abstains from certain foodstuffs, like meat for example, and their practice is held up as a virtue, and indeed it is, if they do not go to extremes. However we have to careful when we praise such practices in these great men and women, that we do not fall into an Albigensian frame of mind and end up seeing food as bad and a barrier to growth in virtue - the virtue is temperance and too much denial can be intemperate.

St Benedict in his Rule speaks of moderation and also generous hospitality. Our own Rule, that of St Albert, lays down that Carmelites should abstain from meat, but still requires hospitality to be shown to visitors by the Prior. True virtue, I think, lies in moderation, in abstaining when necessary but also enjoying food and drink as a gift from God. I am a real son of St Teresa in this regard as she tells us that there is a time for fasting and a time for partridge. I see St John Marie Vianney's regrets in later life as an indication of this: as an old man, with the wisdom age and sanctity brought, he regretted the extreme fasting of his youth as youthful indiscretions - he was not the only Saint with such regrets. I also see in one of St Therese's last requests another confirmation of this: as she was dying she fancied a chocolate eclair and asked for one - she was given it and she enjoyed it. It seems dying in an odor of sanctity does not necessarily exclude a treat.

Faith and food is one of the themes of that great Danish movie Babette's Feast. In the movie we have a great Parisian chef, now working as a cook in the household of extreme Puritans, who inherits a sum of money and who wants to spend it on a fine feast for her employers and their friends. It is an extraordinary feast of a movie and an exploration of the difference between Catholicism and Puritanism, As Babette praises God through her art of fine cooking, sharing her gifts and dishes most generously with her employers, they are in a tizzy as to how to respond - such sumptuousness goes against everything they believe and live. It is Babette who has chosen the better part here, food is God's gift and we must celebrate that.

Chesterton would be a real life Babette, a man who eschewed slim austerity in favour, I hope, of a more moderate and generous approach. His friend George Bernard Shaw, an unbeliever, was a vegetarian and a secular ascetic, as Chesterton sought to bring him to faith (he failed there, sadly), he also tried to bring to him to a different view of food (he failed there too).  Asceticism for the sake of asceticism is not good, it must be a vehicle to a greater good - to self-control, greater virtue and the ability to put things in their proper context in terms of our relationship with God. It is this latter end which urges us to see food and drink as wonderful gifts of the Lord to be appreciated and enjoyed. If sanctity consisted in complete abstinence from food or its enjoyment, then Jesus would not have eaten, yet if there is one thing that is clear from the Gospel Jesus loved a good meal and never refused an invitation to be fed. This led to his being accused of gluttony and drunkenness (cf. Luke 7:34). True virtue is to be found in the imitation of Christ, if we deny what Christ confirmed then we had better think again.

I hope the investigator into Chesterton's Cause will find enough evidence to recommend its initiation. He may find a man who struggled with food and drink, but that would not necessarily prevent a Cause, we would have to see how he dealt with it and it may provide the Church with a patron for those who themselves struggle with eating disorders. Anyway, we shall see. I will keep praying and hoping, and reading Gilbert. Today is a fast day, the Church's penitential day, so I observe that, as should we all, and Sunday is a feast day and we should all observe that. (Note to self: I wonder if I can pick up an eclair tomorrow for Sunday? Like Therese, I am partial to eclairs!) 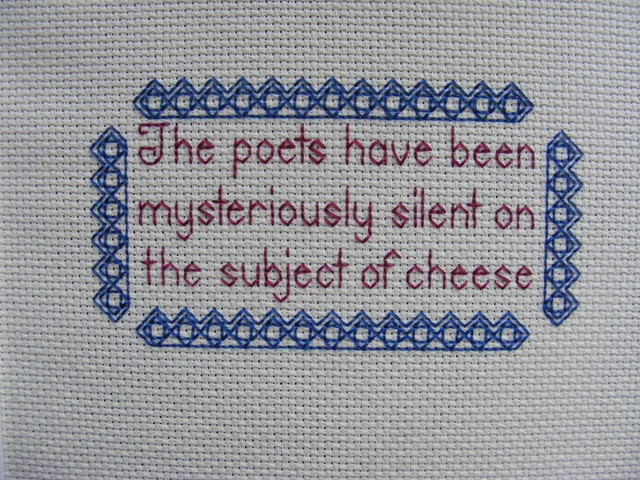 Words of wisdom from G. K. Chesterton
Posted by Father Director at 11:19 AM