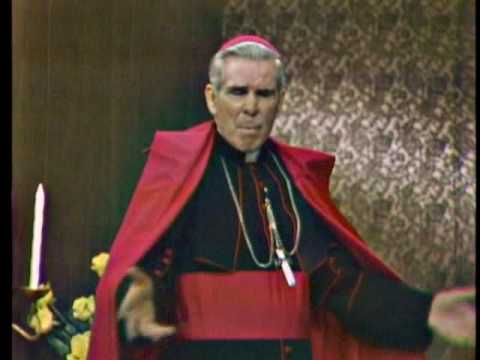 We saw this one coming, but I never thought it would result in the suspension of the Cause of the Venerable Fulton Sheen.  As you may have heard, the Cause of the popular Bishop has been suspended due to a dispute over his body.

In brief: his home diocese, Peoria, which sponsored the Cause and has done Trojan work over the last twelve years or so, has asked the Archdiocese of New York to allow the remains of the soon to be Blessed to be returned to the diocese so First Class relics can be taken to be prepared for the veneration of the faithful and a shrine established. Over the last number of years there has been a rather tense situation with regard to this request because New York, where the Archbishop is buried - in the crypt of St Patrick's Cathedral, is not so keen to let him go.  As tentative plans are being considered for the beatification ceremony in Peoria (the beatification miracle has yet to be approved by the Congregation of the Causes of Saints and the Holy Father but it seems the miracle will pass through those stages fairly easily) the request was made again, and it seems New York has said no: Fulton ain't moving. So the Bishop of Peoria, in consultation with the Congregation in Rome, and with its advice and support, has suspended the Cause and it is now relegated to the historical archives.

So there we are. What would Fulton say? Well, he would not be impressed and given his passionate sense of reason he would make his views known so no one is left in any doubt. However, without an apparition or sign from heaven (which would then be subject to the Church's discernment process - which would take us into the next century before a judgment is made) we are at an impasse. This is like being back in the Middle Ages when the citizenry of dioceses, cities and towns were fighting over who owned which Saint, and then went about all over the place stealing Saints's bodies. Fulton would not be impressed.

So, who deserves to have the body? Well, both dioceses have a case. The home diocese of Peoria is the sponsoring diocese for the Cause and the Bishop and people there have worked hard to get it to where it is. They financed part of it, but a lot of the finance came from people all over the world who made contributions out of devotion to a man they consider a Saint. Usually the diocese that sponsored the Cause should have the relics, or the greater part of the relics, of the Beatus or Saint. Peoria is his home, and he was a priest of that diocese, so justice might well dictate that Fulton should come home. It is also worth noting that the Holy See expected that the body would be returned to Peoria.

However, New York also has a case. Fulton was Auxiliary of New York, and lived most of his life there. He retired there. Most importantly he ministered there with great success. He filled St Patrick's Cathedral just as Ambrose filled Milan's Cathedral. People came to New York, a city at the centre of the world, to see him and hear him. If the world wants to come to venerate his remains, then the most central place is New York. Fulton was buried in the crypt of St Patrick's as an honour to thank him for his extraordinary ministry in the city and archdiocese.

So, there we have it - both dioceses have a case; there are reasons for and against each diocese: now what should be done? Given that we no longer divide up the bodies of Saints, thankfully - relics are just portions, it will not be a case of Solomon's judgement where half of him heads off to Peoria and the other half stays in the Big Apple. For such a Medieval dispute some might suggest such a Medieval solution. However, there is another Medieval solution which may be the best way to resolve this dispute and allow Fulton's beatification progress: let the Pope decide.

The Pope is not just the head of the Church on earth and symbol of unity within the Church, he is also the one who settles disputes. From time immemorial conflicting bishops, kings, nobles and others appealed to the Pope to settle disputes and his judgement was binding since he was the Vicar of Christ and his word was the word of God on the matter. That faculty still exists, and it is exercised in many ways, one being the right of every Catholic to appeal to the Holy Father in issues of canon law etc. In annulment cases, for example, if a person or couple is not happy with the decision of a tribunal, they have the right to appeal to the Pope.

Let Pope Francis decide where Fulton is to rest, and both dioceses accept that decision even if it goes against them.  The only snag is that Francis might decide to send him to the cathedral in Rochester where he was Ordinary - smell of the sheep and all that. Would Fulton like to return to the place which caused him so much grief?  Well, sending him there might itself start another row...

There is no doubt that people are shocked, confused, saddened, and I would even dare say, scandalized, by the suspension of the Cause and the dispute which led to it. With all that is going on in the world, the systematic martyrdom of our brothers and sisters in the Middle East being one issue the Church needs to engage with, a fight over the body of a Saint is unnecessary, unseemly and a distraction. The Bishop of Peoria has asked for prayers and that is a good request, so let us all pray that common sense and Christian charity will prevail. We are living in dark times, we need hope and we need models of joy and faith to inspire us - the Ven. Fulton is one of these. Let's get this out of the way so the Church can celebrate the life, holiness and teachings of one of her most faithful sons and give us all a boost in these challenging times.

PS: Just reflecting on it, I  think Fulton is probably laughing in heaven: two dioceses fighting over his body, both want him. He surely remembers the years when no one wanted him as he preached the truth in a time when not even Bishops and priests wanted to hear it.
Posted by Father Director at 3:45 PM