A few months ago someone said to me that the Holy Father reminds them of an old parish priest in the way he preaches. These pious old souls who had spent a lifetime labouring in the vineyard of the Lord, would get up on a Sunday or weekday and offer lovely little meditations on the Gospel, sometimes flavouring them with little stories, or spicing them up with a few denunciations.  And then there were times when, on a roll, they would give out and bang the pulpit before retreating to a pious thought to help the last of the medicine go down. Well, we might see some similarity with the Holy Father.  He is well able to offer nice reflections, but has often metaphorically thumped the pulpit.  And he certainly did it a few days ago when he tackled the Mafia, doing something that would horrify many of our enlightened pastors today: he threatened them with hell.

Are the old hell-fire and brimstone sermons back on the agenda, we might ask? Well, I do not know, but Francis has certainly proclaimed a truth that many today do not like to hear: that hell is a reality and if people live a certain way of life, they may well be on the road to hell.  Here is what the Holy Father said to the Mafiosi:

I'm not so sure the Mafia will take note, this is the third pope in a row that has denounced them and their activities, but what Francis said needed to be said. So if members of the Mafiosi find themselves plummeting down to hell fire they cannot say they were not warned.  But then again all of us need to keep such warnings in mind too.  Hell is not reserved only for the Mafia or serial killers or people who commit sins that are considered by modern men and women as being outside the toleration/justification of political correctness.  As St Teresa of Avila told us after her excursion to hell in one of her visions - Satan has a place reserved for each one of us and he does his damnedest (pun intended) to ensure we check in to the Hotel Infernal after we throw off this mortal coil.  And oftentimes he has no better accomplices in the task than us. It would be a mistake for us to get up on our high horses and look down our nose at the Mafiosi, we must have care for our own souls.

For an interesting article on Pope Francis's words see Francis Phillip's piece in The Catholic Herald.

As regards the Mafia and organised crime in general, the Church now has an unofficial patron in the recently beatified Blessed Giuseppe Puglisi - or Blessed Pino as he is more commonly known.  Blessed Pino was parish priest of a Mafia-ridden parish in Palermo in the early 1990s.  He fought the local Mafia dons, trying to keep his young people away from their influence and seeking to help his parishioners escape the cage of fear these dons had constructed. Warned by the dons that his life would be in danger if he did not desist, Fr Pino was martyred by Mafia hit-men in front of his parish church on 15th September 1993, his fifty-sixth birthday.  He was beatified on the 25th May last year.  Let us ask his intercession that the scourge of organised crime, not only in Italy, but all over the world, will be overcome, and that those involved in it will be converted and leave the path which is leading them to hell. 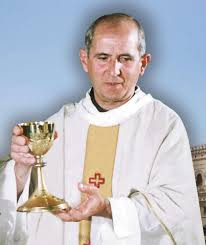