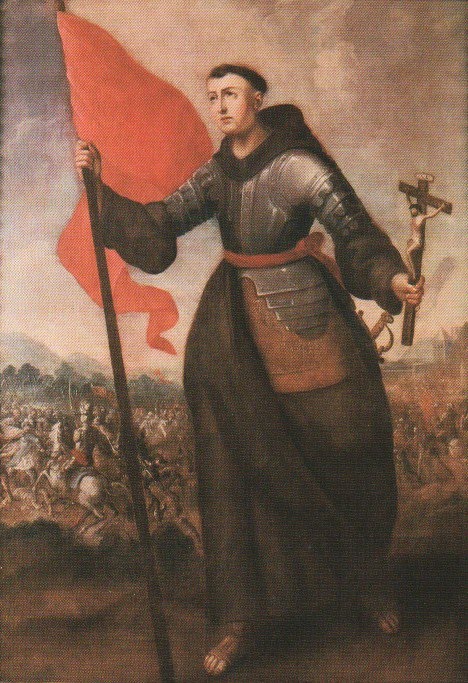 ﻿
As regular readers of my blog will know I have a great regard for Fr William Doyle, Jesuit priest and mystic who died as he was serving as a military chaplain during the First World War.  Almost a century after his death devotion to him is growing and favours are being granted, however no Cause had yet been opened (don't get me started!).  We can only hope and pray that one will be opened soon.
Well today is the feast of the patron of military chaplains, St John of Capistrano.  St John initially trained as a lawyer and worked for a while as a judge, but the call to priesthood and religious life led him to the Franciscan Order.  As a friar he spent his life travelling around Europe as a preacher - a missionary in effect, preaching against the various heresies that were distracting people from the faith.  He was a military chaplain and proved himself to be very heroic on the battlefield, tending to the needs of the wounded, maimed and dying.  He himself died following battle, though not of wounds, succumbing to fever contracted at the Siege of Belgrade in 1456.
Today, then, let us pray for all our military chaplains: our heroic priests who offer their lives to care for those who serve in the armed forces and their families.  These priests are often found in the midst of conflict, dodging bullets and bombs on the battlefield to bring the sacraments and comfort to the injured and dying.  I would ask you to remember in particular a brother-priest of my diocese, Fr Robert McCabe who is presently in the Golan Heights on peace-keeping duties with the Irish army.  And while you're at it, you might say a prayer that the powers that be may get the finger out and start Fr Willie Doyle's Cause!  For more information on Fr Doyle follow this link.