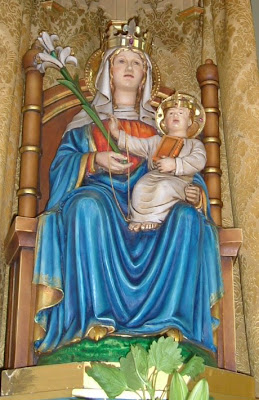 Today our Fraternity members in England gather at the Shrine of Our Lady of Walsingham: please remember them in your prayers.

The Shrine, known as England's Nazareth, was founded in the 11th century following a revelation from Our Lady to Richeldis de Faverches who was told to build a replica of the Holy House of Nazareth.  A large shrine which grew up around the Holy House and became one of the most important in medieval Europe.  Find out more here.

I am leading the pilgrimage, so it will be a joy to visit this beautiful shrine.  All our members will be remembered in the prayers and Masses offered.  While the Shrine was destroyed by Henry VIII following his revolt against the Church, one of the country chapels which lined the route to the sanctuary, the Slipper Chapel, which is a mile from Walsingham, remained intact, and here at the end of the 19th century, Catholics restored a shrine in honour of Our Lady: we will have our Pilgrim Mass in that tiny medieval chapel tomorrow morning at 9am (GMT). Send your Guardian Angels with your intentions.
Posted by Father Director at 8:00 AM

Email ThisBlogThis!Share to TwitterShare to FacebookShare to Pinterest
Labels: Fraternity of St Genesius, Our Lady of Walsingham